The UK’s global ranking in pharmaceutical trade balance has dropped from 4th to 98th over the last decade. Senior Policy Analyst Dr Liz Killen draws upon findings from the 2022 UK Innovation Report to look at the reasons why.

If you took a snapshot from the year 2010, you’d probably conclude that things were looking fairly good for the UK pharmaceutical industry. In 2010, the UK exported more pharmaceutical products than any other country except Germany, Switzerland, the US, and France, ranking it 5th in global pharmaceutical exports, and 4th in the overall global trade balance in pharmaceuticals. 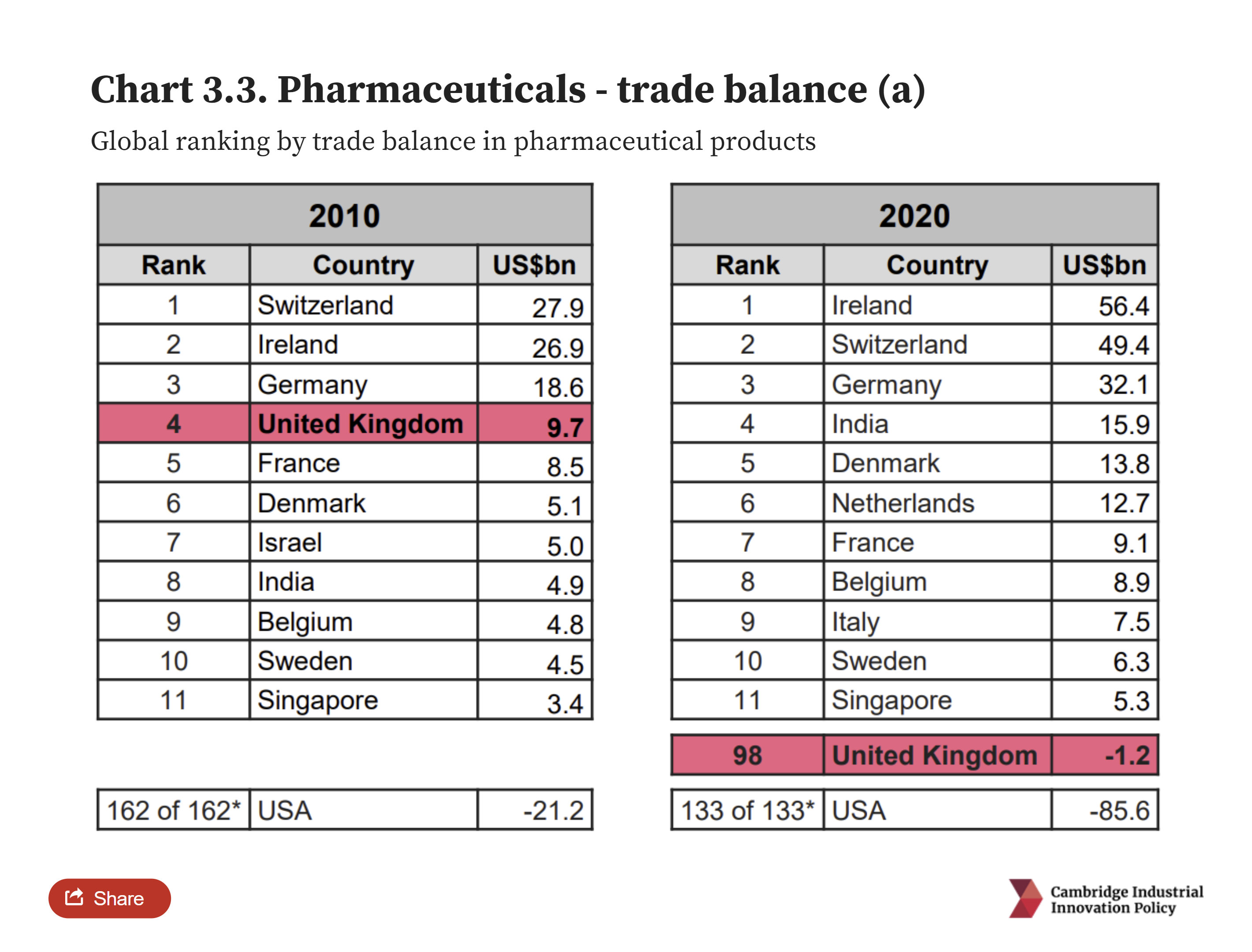 Four reasons for the reduction in trade competitiveness

For the 2022 UK Innovation Report, published annually by our team at Cambridge Industrial Innovation Policy, we consulted sectoral experts and reviewed the literature in order to understand the drivers behind these trends.

There were four key themes that arose from these discussions.

In addition to gathering expert judgements, analysing the changes in Britain’s top trade partners can provide more detail on both challenges and opportunities for the industry. For the 2022 UK Innovation Report, we looked at the changes to the UK’s top 10 trade partners, and this showed that the picture is not uniformly one of decline.

For many European countries, the picture was one of worsening trade balances over the decade. In both Italy and France, imports rose while exports fell, resulting in a net reduction of just over £1 billion in trade for each country over the decade.

For some of the UK’s top trading partners, both imports and exports grew, but the rise in imports was outstripped by the growth in exports. This was true for the Netherlands, with a 14.4% compound annual growth rate (CAGR) in imports and only a 1.5% annual growth in UK exports, to a tune of £3.2 billion lower trade balance in 2020 compared to 2010. The picture was similar, but to a lesser extent, in Germany, with 4.4% CAGR imports vs 0.9% CAGR UK exports and a £700 million difference in trade balance in 2020 compared to 2010. 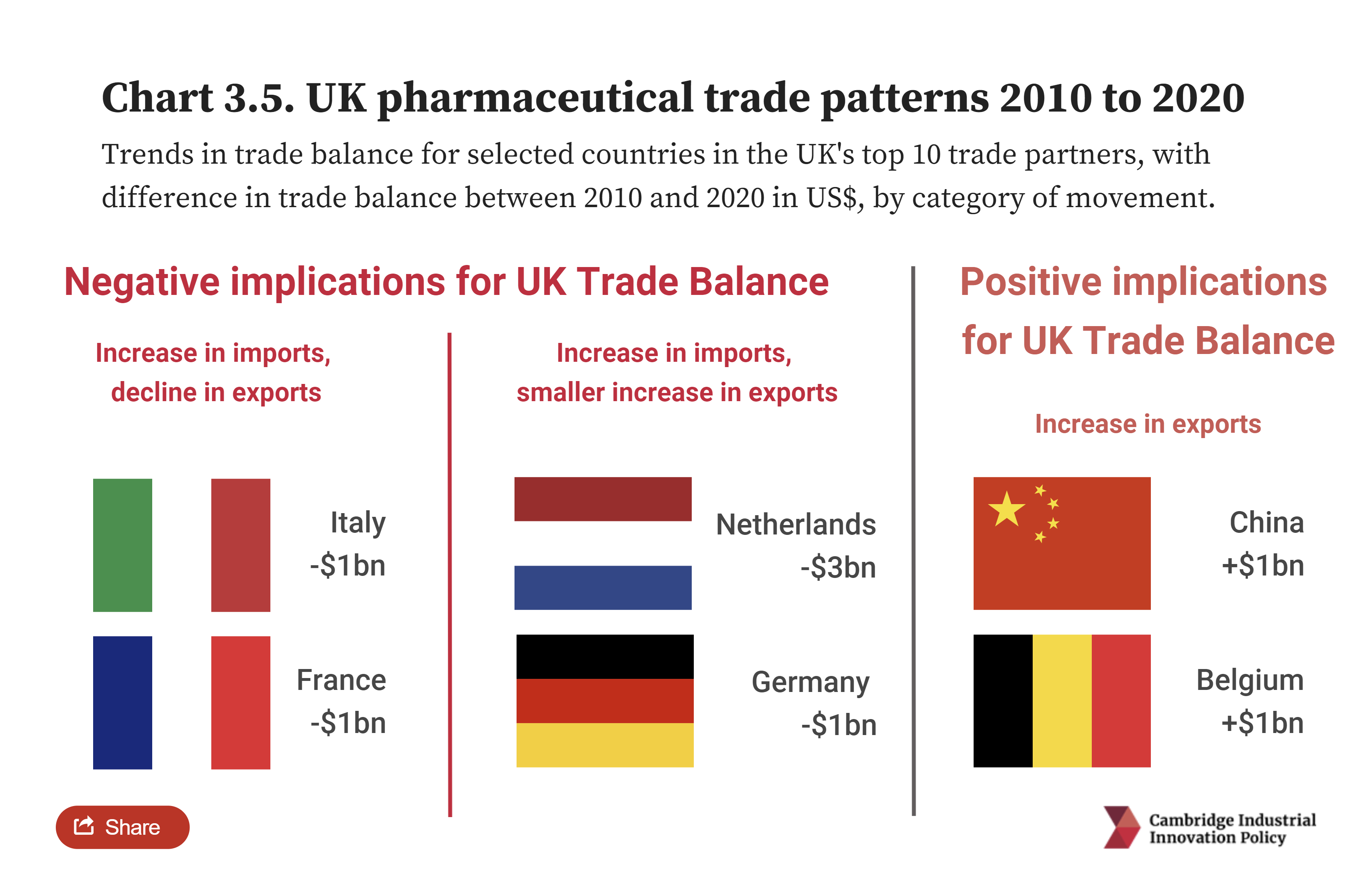 The picture is not all doom and gloom however, and there have been some successes in UK pharmaceutical trade over the past decade. The UK has exported more medicinal and pharmaceutical products to China and Belgium, with a 13% CAGR between 2010 and 2020 for each country, bringing in £1 billion more in exports each in 2020 than 2010.

It is these new export markets that need to be capitalised on if the UK’s trade balance is to shift. While imports appear to have declined slowly from around 2016 through to the most recent 2021 data, pharmaceutical product exports appear to have remained relatively stable over the past few years. While the UK saw increases in gross value added (GVA) from pharmaceutical manufacturing of 18% between 2019 and 2021, likely to meet domestic pandemic demand, it is uncertain whether these will translate into increases in sales to export markets into 2022.

The importance of reversing these trends for the UK economy

Despite recent declines in exports and productivity, the pharmaceutical industry remains a major sector of the UK economy, which contributed $7.5 billion value-added to the UK economy in 2018.

However, while the productivity (GVA per employee) of the pharmaceutical manufacturing sector is higher than average for UK sectors, it only moderate by comparison to other leading nations, and productivity declined between 2008-2018 at a rate of 7.9% per year (CAGR). 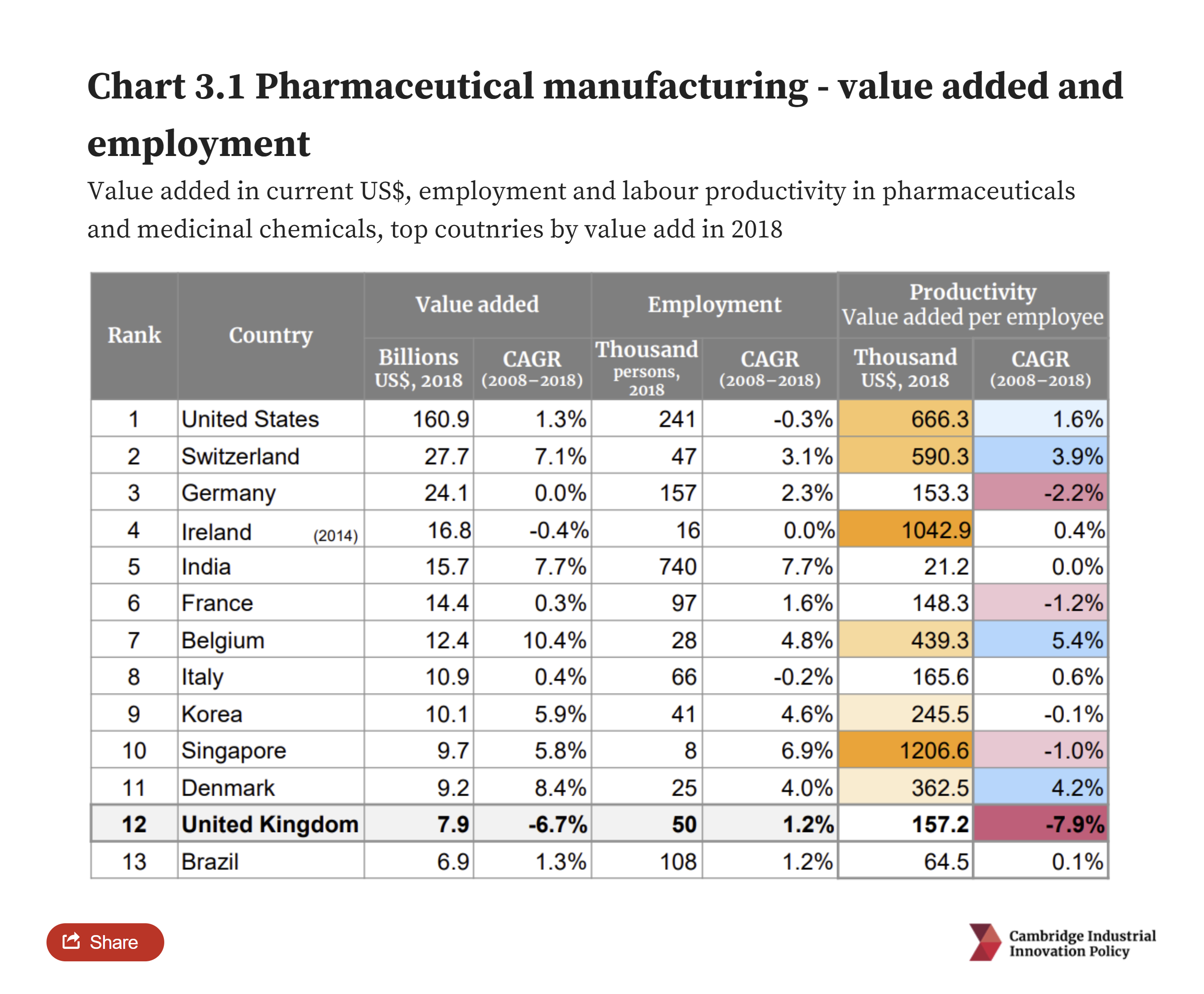 It is precisely because this high-productivity, high-value-added sector is in decline that the UK Government should take steps now to maintain the UK’s leadership in the pharmaceutical sector.

The UK possesses key capabilities and skills which can be leveraged in capturing the next wave of innovation in pharmaceuticals. There is also a strong culture of start-ups, with pharmaceuticals claiming the most university spinouts of any sector in the UK in Beauhurst’s recent analysis.

The government’s broader aim to increase UK R&D expenditure to 2.4% of gross domestic product (GDP) will only support this innovation pipeline, which could serve to anchor manufacturing and business R&D expenditure in the UK. Both the UK government and pharmaceutical industry are active in promoting this agenda, with key policies including the Life Sciences Vision in 2021 and the Medicines Manufacturing Industry Partnership of 2017.

The data reflects the larger economic forces that have buffeted the UK’s pharmaceutical industry over the past decade. But Britain retains a number of competitive advantages in this sector that, if properly cultivated, could see that trade balance improve in the coming years.

This analysis draws from Section 3 of the 2022 UK Innovation Report. Values reported are US$ unless identified otherwise, to aid in international comparisons.

For data, references, and more analysis on the UK’s competitive advantage, including sectoral analysis of productivity, and whether the UK is capturing value from the net zero transition, see the full 2022 UK Innovation Report, produced by the Policy Links team at Cambridge Industrial Innovation Policy.

Read more about some of our recent projects